Henri Cartier-Bresson always avoided being photographed, believing that the photographers image should be personal not public. This concept was taught to me by my early teachers, this is a strange thing in the era of selfies. But Sandie and I were on assignment in Cuba and came across this tall street photographer with his wife and son. They were on the steps of the old Capitol building in Havana. We were there to photograph the El Capitolio Nacional de La Habana building which is a close copy of the one in Washington USA. It was not used by the Cuban government for various political reasons and was showing signs of decay, decay partially due to Cuba being under embargo from the the USA. The upside of this is the incredible ingenuity of the Cuban population. Most people know of the old cars of the 1958 era, still running with Russian tractor motors, stunning architecture and wonderful Cuban music. But this photographer was amazing and demonstrated the unique character of the Cuban people.

Alas I do not know their names, very unprofessional on my behalf. Not being able to speak Spanish we get buy with respect and friendly gestures and of course payment for services and the consent to photograph them. So to the technique… In the image is an old speed graphic by Grafllex. It is a very early model, front focus rails are still used but the rear of the camera is his darkroom. Remember Cuban’s had little chance of purchasing digital hardware, this image was the era of the Nikon D3 and Sandie and I were armed to the max with kit.

He was producing candid portraits on the steps of the Capitol building, he had three issues, one, no digital instant image, two, no polariod instant image, and three, the dome of the capital could not be seen during the portrait capture as it was meters above. So this gentleman had a solution for these issues.

On the back of the camera was a large box and inside was a darkroom, yes a wet darkroom. He used paper as the negative material, I have no idea were he got this material but Cubans are very resourceful indeed. The camera is natively a 4x5 inch format so he used a 150mm lens to take the initial portrait which we asked his wife to be in the shot with the two of us. On top of the camera was a focusing loop allowing through the lens focusing. I assume he had a mirror inside that assisted with this. It meant that the photographer had his hand inside the camera at all times. The gentleman put his arm into what seemed to be a converted film changing bag, what you would use to load film in the field back in the days of film. This enabled the access to the inside of the camera. One handed he would focus on a ground glass in the camera using the mirror, then place or tape photographic paper on the lens side of the ground glass, using the lens cap as the shutter he took our portrait. After exposure his son changed the lens on the front of the camera and raised a wooden copy board seen hanging on the front of the camera. Remember that the photographer needed to block light from the removal of the lens and also light coming through his makeshift  focusing system. The new lens must have been very short probably a 65mm allowing him to copy the processed paper negative and convert it to positive in the camera again. But he had a already exposed negative of El Capitolio. The negative of Sandie and myself was still wet so the son stuck the neg of the tower to it easily and the photographer copied them both to a new paper image, this time a reversal or positive image was created. This image was crudely fixed and washed and given to us wet.

We were both blown away, this guy would easily get a Phd on this technique at art school, to this day I have never seen such confidence in such a makeshift way. Back to old Henri, got to say best portrait of two working photographers I reckon. I will find his name eventually, and if anyone can share light on him and his family please let me know.

I would highly recommend a visit to Cuba it is an amazing place, one of those places where you can walk the narrow streets at night take wonderful images, indulge yourself music, food and the odd beverage and feel welcome and safe. 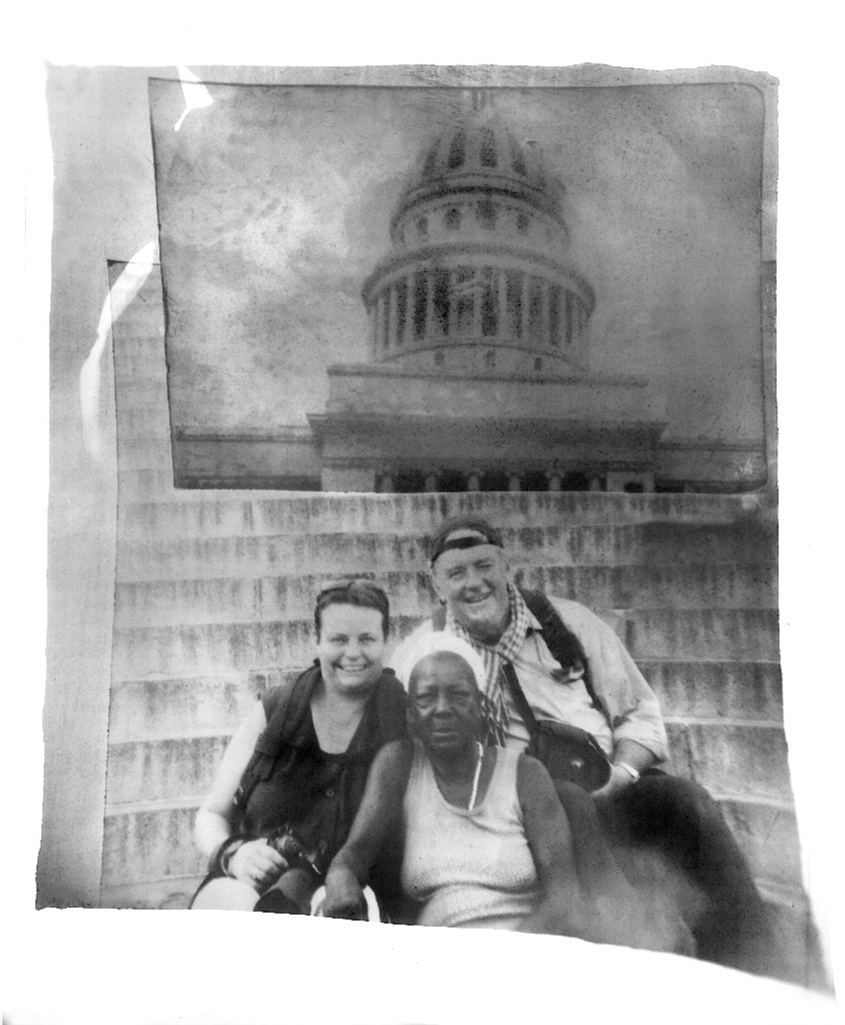